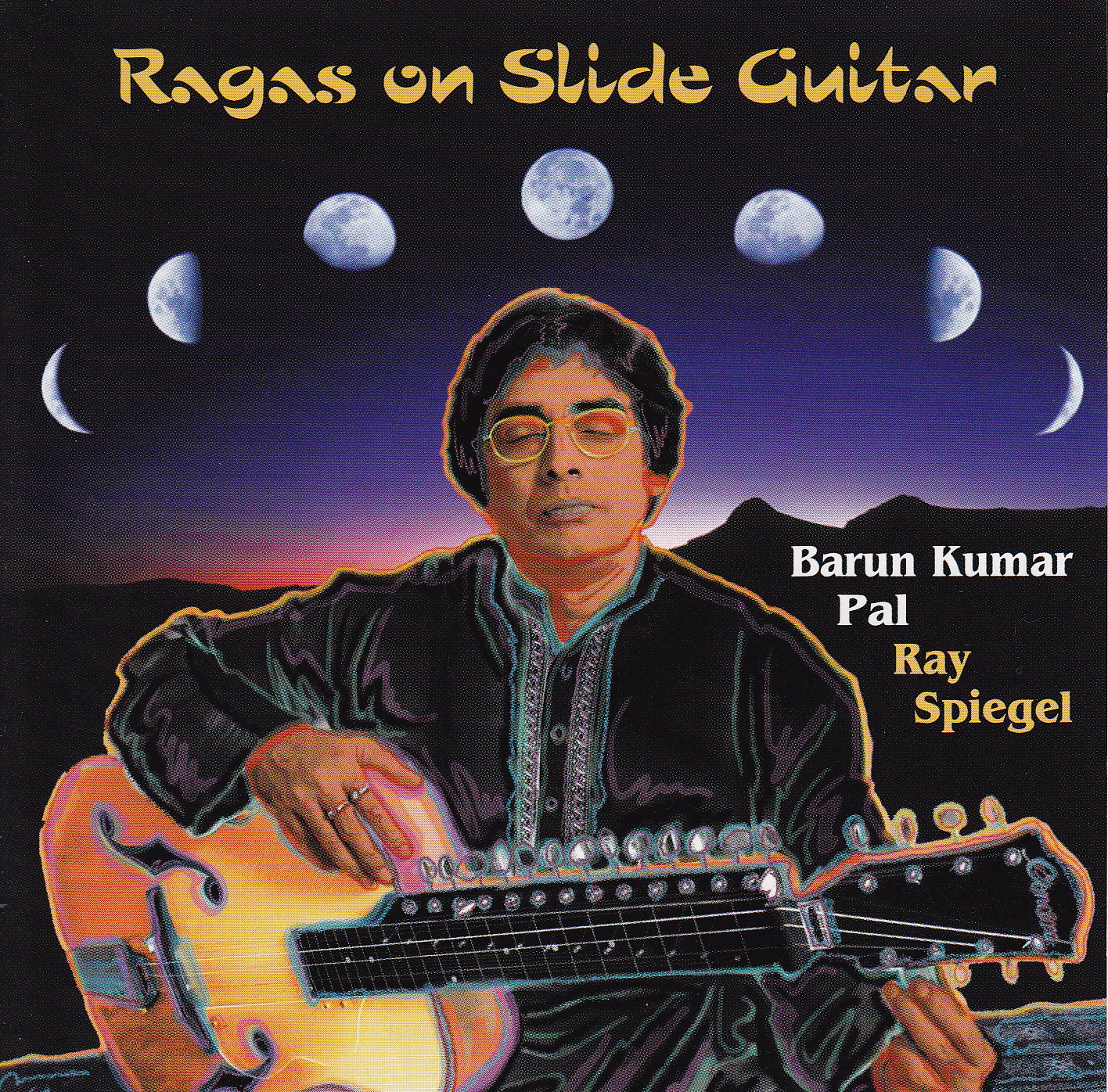 Ragas on Slide Guitar was released in 2003.
Barun Kumar Pal is one of India’s great musicians. He has played the slide guitar since childhood and was a child prodigy on the instrument, performing in concerts and radio broadcasts since the age of 7. Barun comes from an enlightened musical family from Eastern India in what is now Dhaka, Bangladesh. Over many years Barun has made numerous innovative changes to the instrument he started playing as a child, adding strings and changing the shape of guitar until it now resembles an Indian musical instrument more than the “Hawaiian style” guitar from which it evolved. In addition to his amazing technical prowess on this instrument, derived from countless hours of practice, Barun Pal, a disciple of the maestro Ravi Shankar, possesses a treasure-trove of knowledge of the Indian Raga system of music, and a highly developed approach to rhythm. He resides in New Delhi, India at the Aurobindo Aashram where he is the director of the music department, and oversees the teaching of hundreds of students from all over India and abroad. He has accomplished new and innovative feats of teaching, such as composing for and conduting a children’s orchestra of Indian classical music with over three hundred members!

Barunji has chosen Raga Malkauns for this recording. It is a serious and deep raga that is difficult to play. The mood of Raga Malkauns is calm and grave and evokes the feelings of devotion, sadness, and heroism. The traditional time for this raga is mid-night.
The recording begins with track 1, “Alap”, the traditional opening movement in which the artist slowly reveals the raga note by note accompanied only by the droning of the tanpura. The tempo gradually increases to a fast pace and concludes. The next piece is the “Madhya Gat in Teen Tal” (track 2) where the tabla joins the slide guitar in a rare vocal composition adapted perfectly by Barunji to his instrument. Ray Spiegel recorded the original tabla on a low pitched tabla which you hear in the left channel, and later another tabla track on a high pitched tabla in the right channel matched exactly to the low pitched tabla. The effect is that of a duet, or “jugalbandi” made famous by the illustrious father and son masters of tabla, Ustad Alla Rakha and Zakir Hussain. The final portion of Raga Malkauns is track 3, “Drut Gat” in Teen Tal. Drut means fast (gat means composition), and this track features a composition and improvisation in a fast and accelerating tempo, culminating in a rapid final composition at an extremely fast tempo. The last track is “Raga Piloo” a beautiful and sweet raga that expresses the emotions of love, joy, and romance. After a short alap the drums enter. The rhythm is “Sitarkhani tal”, a cycle of sixteen beats with a syncopated lilt. Ray plays the tabla set in the right channel and a nakara drum in the left as well as the manjira, the Indian cymbals.

Ray Spiegel has played tabla for over three decades, having spent many years under the tutelage of Ustad Alla Rakha, Zakir Hussain, and B.S. Ramanna. He also received insight and training from Peter Perringer, who was the brilliant American born prodigy student of Ustads Alla Rakha and Zakir Hussain. He was introduced to the tabla by John Cooper, a visionary composer and pianist who led the East-West Chamber Ensemble in the late 1960’s.

Ray’s first tour abroad was with John Cooper and the ensemble in 1971, which lasted three months, after which he stayed on in India for one year to study tabla with Sri B. S. Ramanna in New Delhi. Born in New York of Japanese-American ancestry, Ray has performed with many of India’s greatest musicians, and is known for his sensitive and exciting accompaniment of instrumental as well as vocal music and tabla solos steeped in the Punjab Gharana (style) of tabla.

Order the CD here: Alternatively, you may download the MP3 album from GooglePlay or CDBaby.
Follow Ray Spiegel