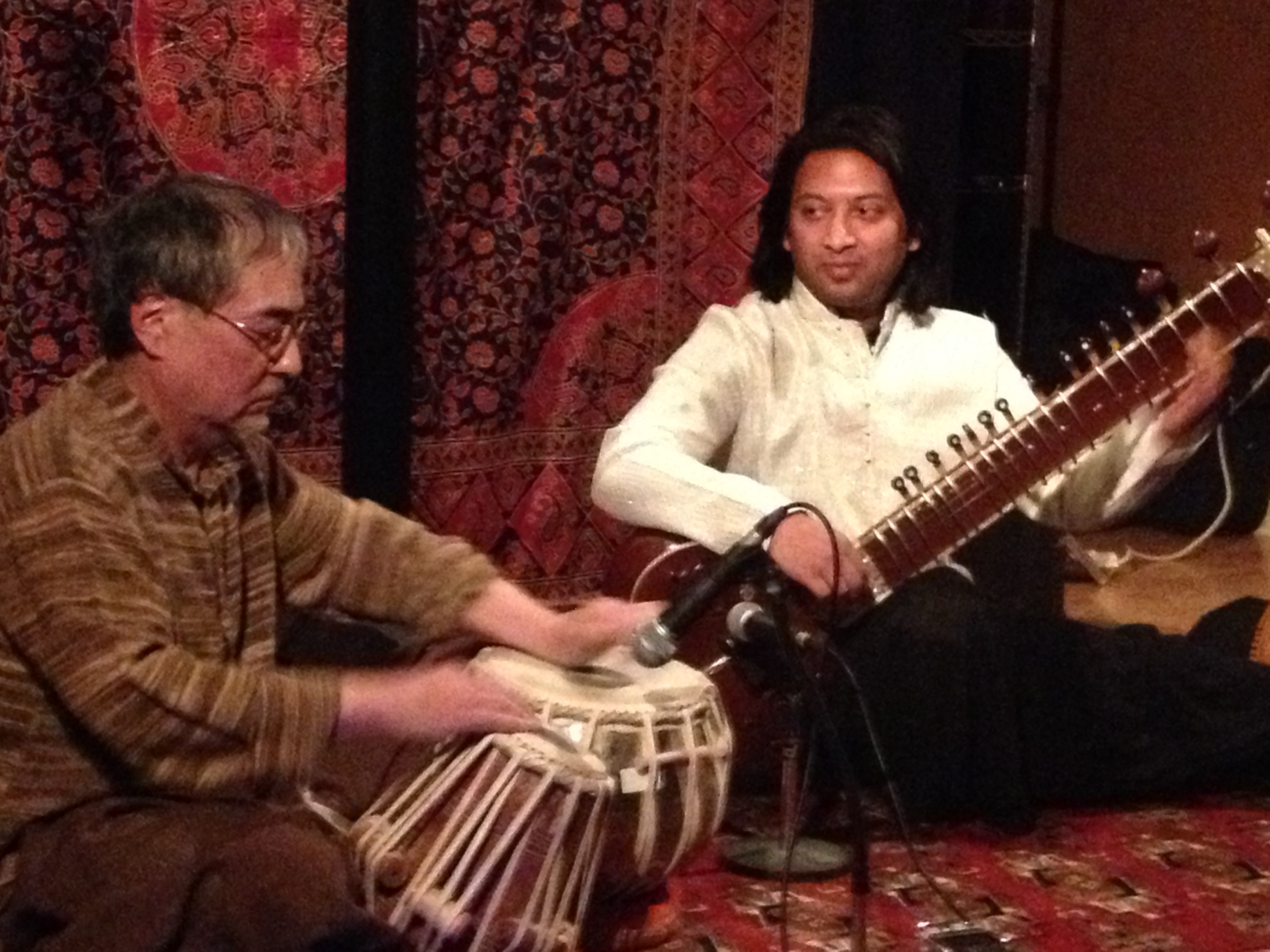 This year, we have arranged a very special concert at the Sanctuary on Sawkill Road for Saturday, October 28. We are very excited about his return.
Sri Shakir Khan will bring violinist Tejas Upadyay.
Most of us are aware that Shakir’s father is Ustad Shahid Parvez, the noted sitar maestro.
Tejas also hails from a respected musical family, his father being Pandit Atulkumar Upadhye, who in turn learned from his father, Prof. Balkrishna Upadhye.
These two young maestros regularly perform with each other in duet concerts. What’s more, their fathers do as well, so we should be in for quiet a treat!

Hope to see all our friends at the free event!

Drum Boogie Festival® is a free, one-day, family-oriented, multi-cultural arts and educational event, celebrating and promoting the many styles of high quality percussion music found throughout the world.

Where:  Andy Lee Field, near Woodstock.

What time: The schedule has a 1pm start for the NORTH / SOUTH INDIAN MUSIC PROJECT

The ensemble weaves together the Ragas and Talas of Hindustani and Carnatic Music with a seamless flow of voice and flute, and the vibrancy of the world of Indian percussion.

A wonderful concert of Indian Classical music is scheduled for the Sanctuary at the Unitarian Universalist Congregation of the Catskills. 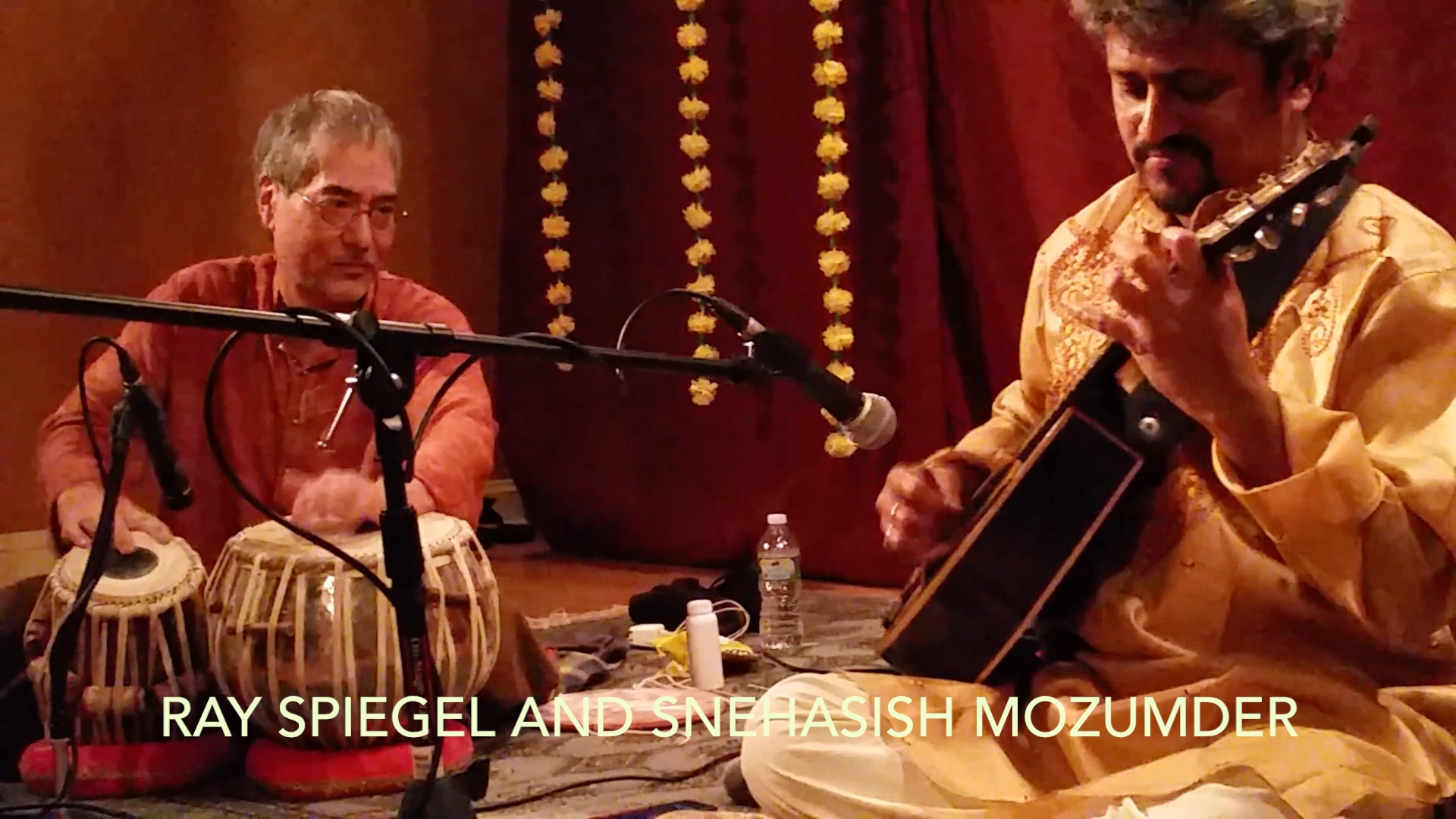 A wonderful concert of Indian Classical music is scheduled for the Sanctuary at the Unitarian Universalist Congregation of the Catskills.

It is with heavy heart that we mourn the passing of the great Pandit Ramesh Misra on March 13, 2017.  Rameshji delighted untold thousands of listeners in his worldwide performances with India’s top musicians and on recordings in various genres of music.  He was a devoted husband, father, and teacher.  Rameshji was known for his kindness, humility, and utmost devotion to music and instrument, his beloved sarangi.

Rameshji was a personal friend to me, and a musical collaborator and guide.  I am humbled and honored to have worked with him on Indian classical and world fusion concerts and recordings.  He is prominently featured on the recordings, “Sum and Kali”, and “Raga Jazz”.  I remember him in the studio recording every piece on the first take.  His knowledge and instant grasp of music was awesome to behold.  I also had the honor of having him accompany my tabla solo in Kingston, NY in 2009, and have accompanied him in a number of concerts.

We will miss him forever.  His mark on Indian classical, and world music will be a permanent influence for generations to come.

His wife, Mayaji, and son, Rohan, the loveliest of people, are in our hearts. 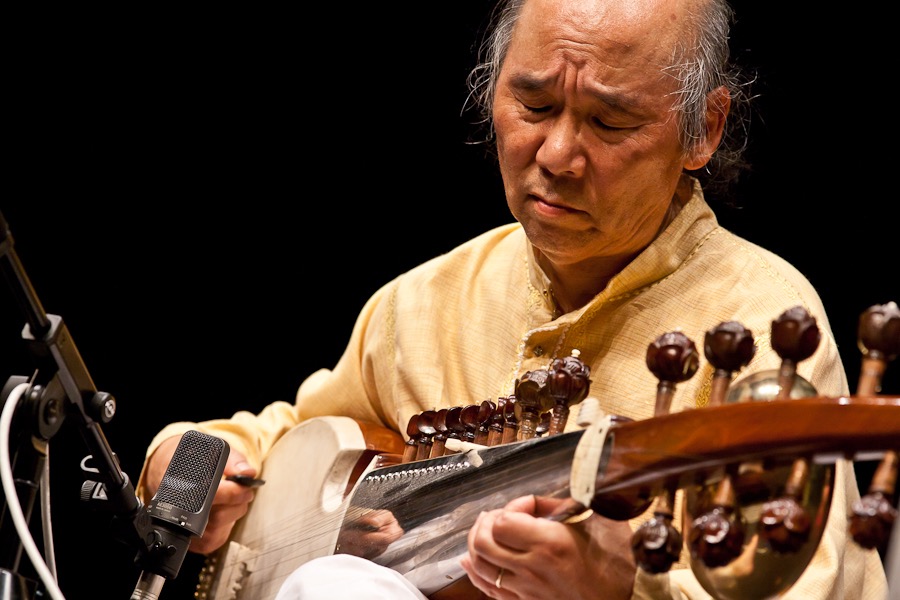 We are happy to welcome a dear friend and unique musician, Steve Oda to our area in early December 2016.  Steve plays the Sarode, the 27 stringed lute of Indian classical music.  Steve is one of maestro Ustad Ali Akbar Khan’s most accomplished and devoted disciples. He has accompanied his Guru on many world tours and concerts, to critical acclaim.

The Sanctuary, Unitarian Universalist Congregation of the Catskills 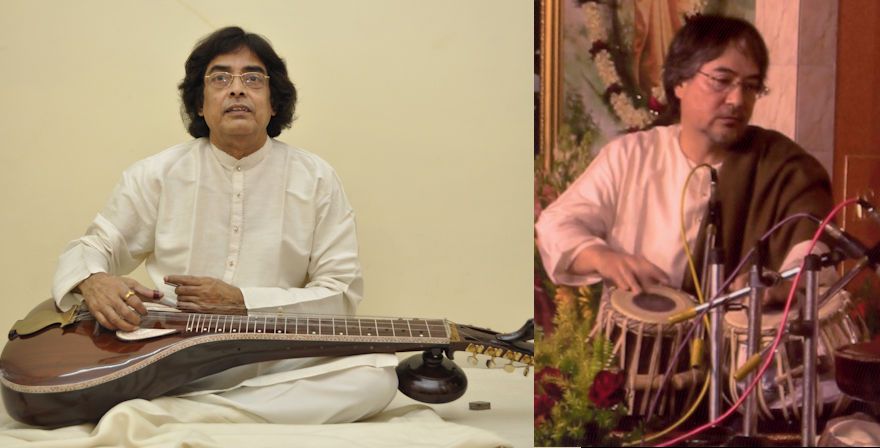 Date: Sunday, June 12   evening
Where: John Medeski and Friends benefit for Khusi Hona at the Bearsville Theater
Barunji and Ray will also be appearing along with many others for this worthy cause.

We are happy to announce a concert with sitarist Sri Shakir Khan.  Last year, Sri Shakir Khan gave a scintillating performance of evening ragas for us.

We are very excited about his return.

Not to be missed … Chirag Katti, sitar, in a Concert of Indian Classical Music accompanied by Ray Spiegel,tabla. Woodstock Music Circle is thrilled to present Sri Chirag-ji in the heart of Woodstock.

Chirag Katti is a rising star of classical Hindustani music from Mumbai, India. He also performs with fusion of Indian and pop music to great acclaim. 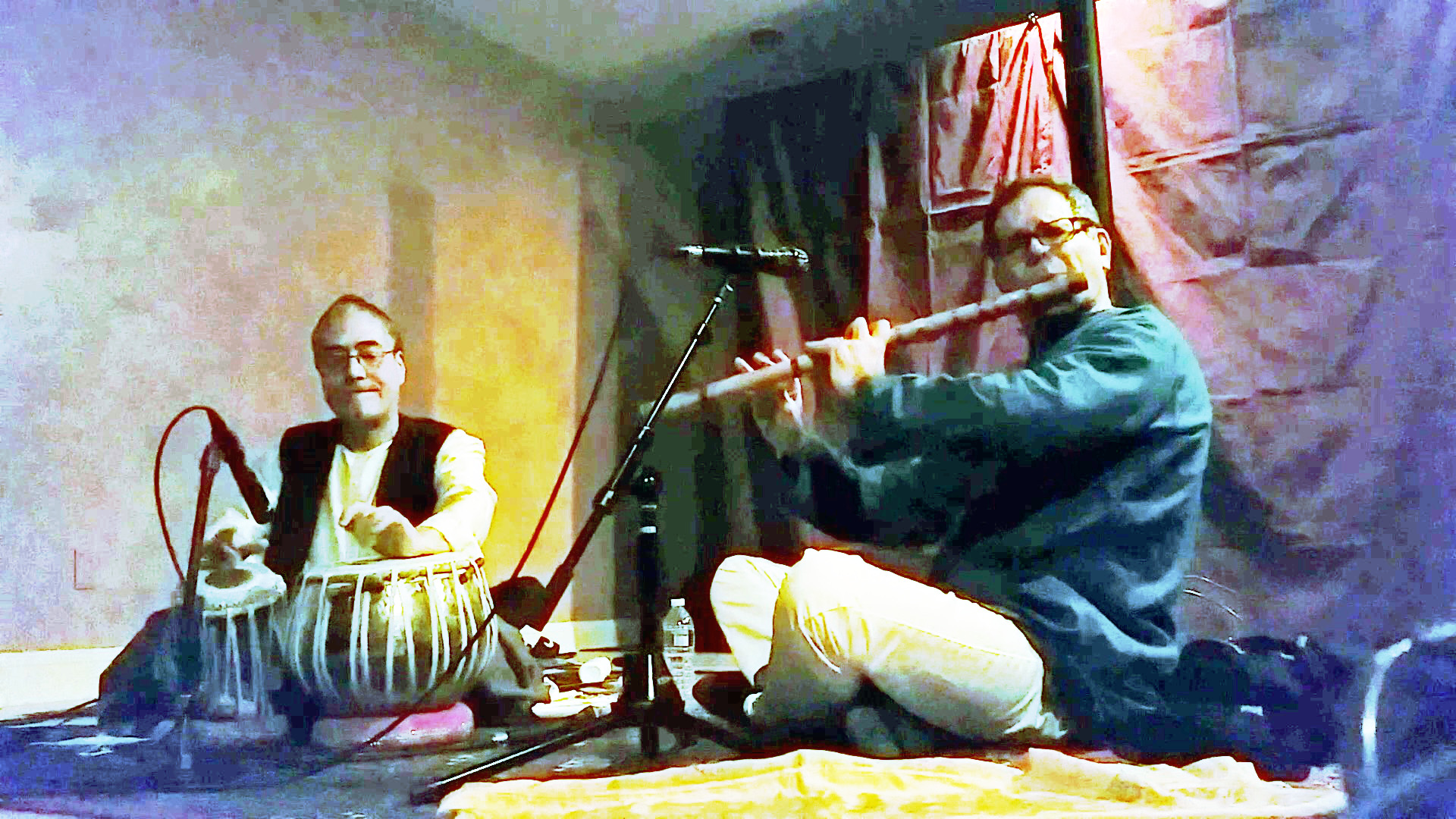 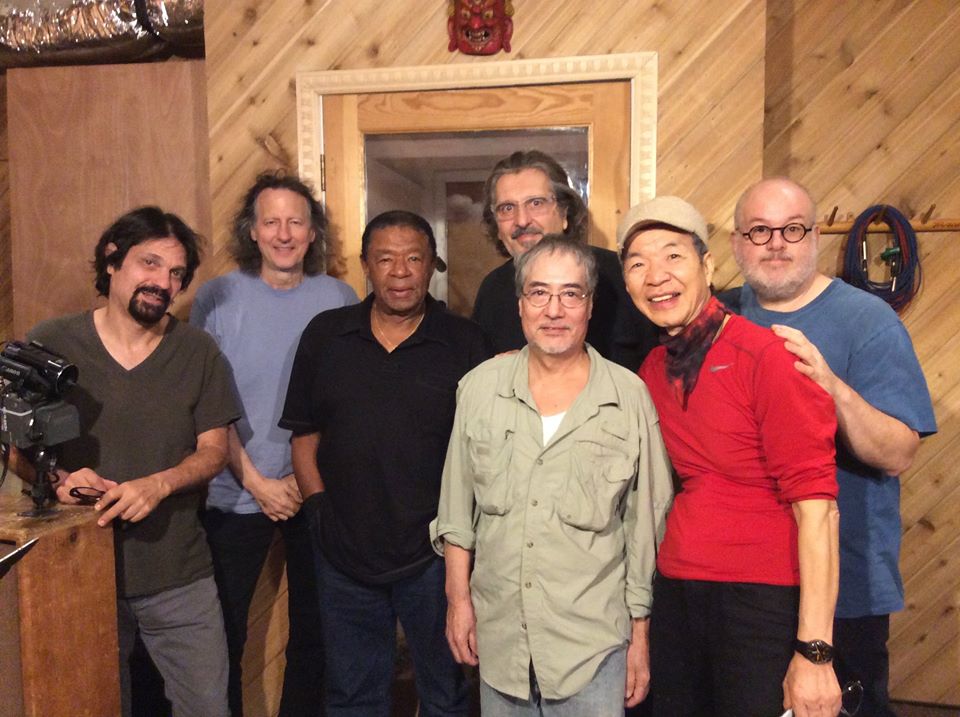 Ray worked with some of the jazz world’s luminaries this September 2015 in a recording session featuring Shunzo Ohno.  Above photo left to right.

True to the old style and without any gimmicks often employed by commercial artists, Ushaji brings a purity and beauty to her ragas.

Born in Mumbai to a music-loving family, Usha Kallianpurkar was encouraged to learn music at an early age. She had been given initial lessons from Pandit Kamlakar Bhagwat and Pandit Durgesh Chandavarkar; both are well known as capable teachers with a specialization in light classical genres.

She began her training in Hindustani classical music under the guidance of Mrs. Sudha Divekar and Pandit Firoz Dastur (guru of Mrs. Divekar). Her rigorous tutelage with Pandit Dastur lasted until 1993, when she moved to the United States.  She presently seeks guidance from Pandit Madhav Bhatki, a gifted composer, teacher, and an exponent of the Gwalior ‘gharana’.

Usha has won critical acclaim for her performances at established music circles in India and in the eastern United States.

In addition to the many Hindustani ‘Khayal’ concerts in the United States, her collaborative forays into other vocal art forms have culminated in performances at the Ravenia Music Festival in Chicago, the Kaye Playhouse, the Lincoln Center, and the United Nations in New York City. She has also collaborated and performed with Jazz vocalists at the Museum of Natural History’s Festival of Asia and, recently, at the prestigious Birdland Jazz Club in New York City. 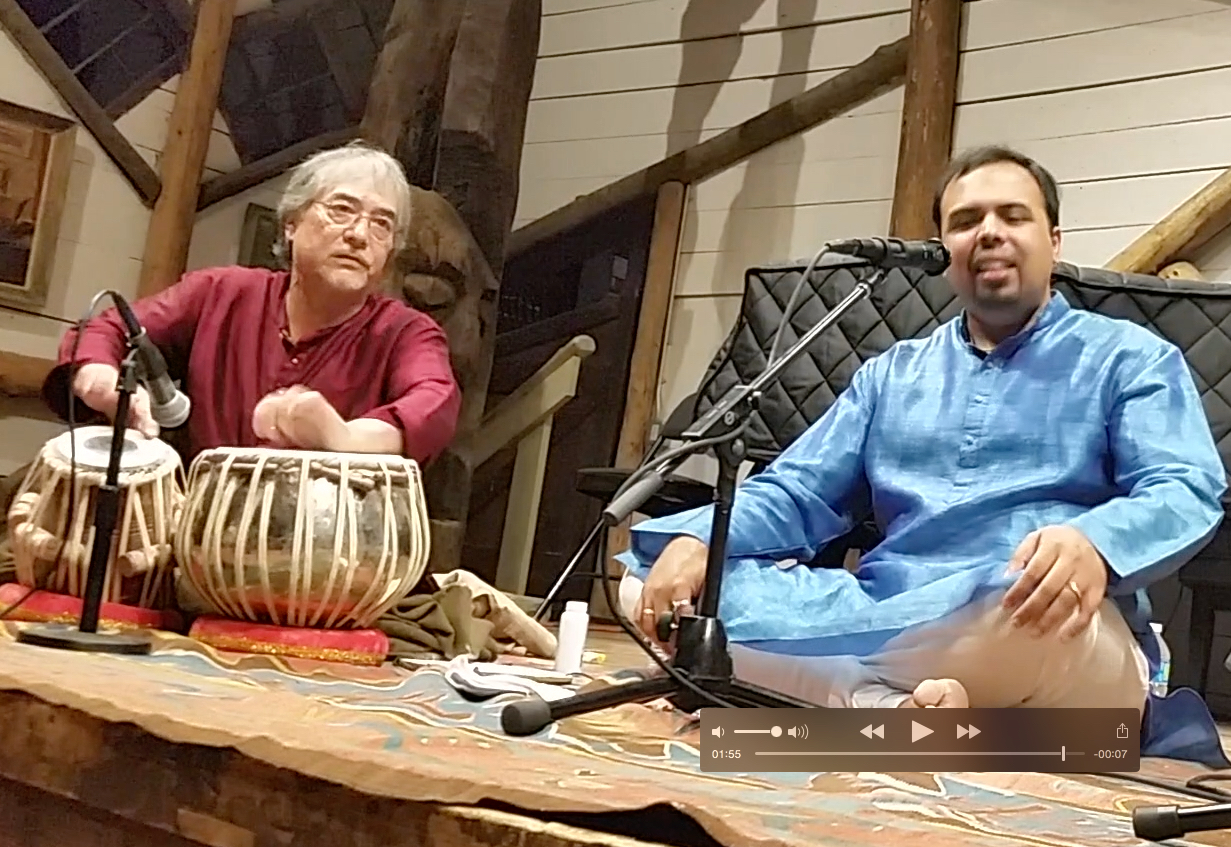 On July 25th, 2015 Ray had the pleasure of accompanying Steve Gorn.

Steve Gorn has performed Indian classical music on the bansuri bamboo flute in concerts and festivals throughout the world. A disciple of Sri Gour Goswami of Kolkata, and Pandit Raghunath Seth of Mumbai,he is well known to audiences in India and the west. He has been praised by critics and leading Indian musicians as one of the few westerners recognized to have captured the subtlety and beauty of Indian music.

Also on the program was Samarth Nagarkar, vocals. Samarth Nagarkar is described by critics as one of today’s foremost torchbearers of Indian classical vocal traditions. He is known for his eclectic, captivating performances rendered within a traditionally rich approach towards raga exposition and gayaki. 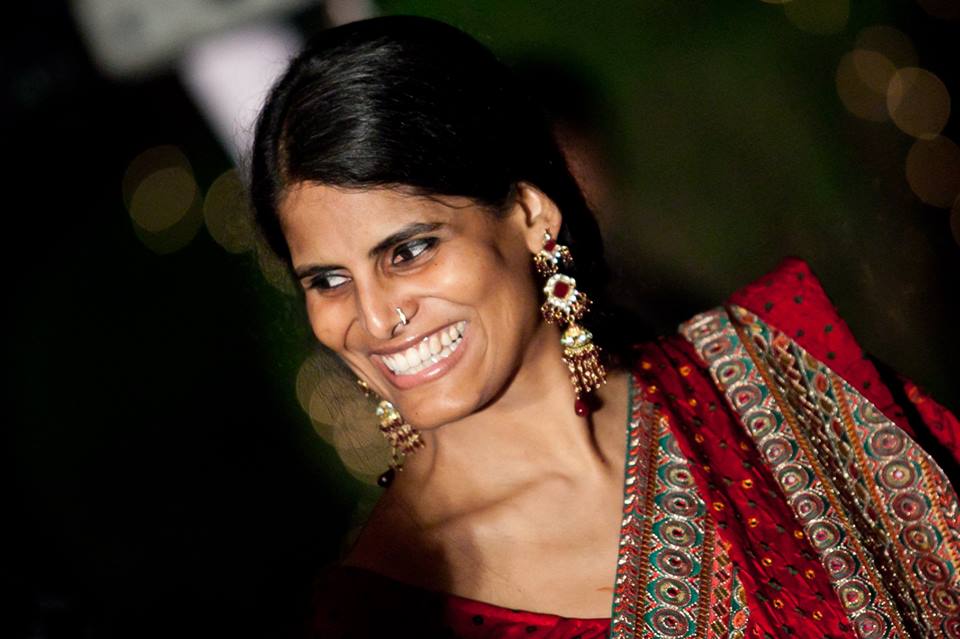 A wonderful concert at the Woodstock Yoga Center, May 9, 2015.

And a Tabla solo …

Happy to have had another opportunity to accompany Steve Gorn, at Woodstock Yoga.